This post by Dr. Jeff Robinson is spot on and resonates with my experience of a minister for three and a half years now. I am thankful for this post: Ministry Means War: 10 Lessons Seminary Never Taught Me 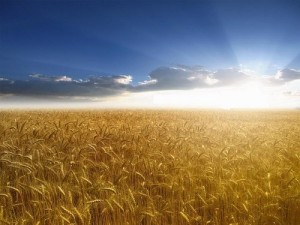 At the Valiant for Truth blog, I was reminded of this truth once again. One pastor encouraged the pastor and author of this post with the following words,

“Don’t think that Sunday is when people are sanctified. Be prepared for a lifetime of ministry to your congregation, one where you will see them struggle with certain sins and shortcomings for years. Be prepared to labor at great lengths and be long-suffering. Over time, you will see Christ sanctify his people. It just probably won’t happen in one day as a result of one sermon.”

This is so true and yet so hard to remember. Pastors and Christians in general get easily discouraged in doing good to others because of the lack of fruit that they see for all of their sowing. But God’s Word encourages us that “in due season we will reap, if we do not give up” (Gal. 6:9).

In his commentary on Galatians Philip Ryken gives a couple illustrations of this point that have greatly encouraged me in my ministry. He writes,

“The harvest will come. It will come at the proper time, a time determined not by the seasons or the weather, but by the will of God. Whether it comes during this life or when Christ comes again (cf. 1 Tim. 6:15), the harvest will come in God’s own good time. In due season, those who do good will reap their reward. Jesus says, “Behold, I am coming soon, bringing my recompense with me, to repay everyone for what he has done” (Rev. 22:12).

Until the harvest comes, we must keep sowing. A good example of what it means to sow and then to wait for the reaping comes from the life of William Carey, the first modern missionary to India. From the day that he arrived on the subcontinent in 1793, Carey began to teach the Bible to anyone who would listen. This he continued to do for the next seven years without winning so much as a single convert to Christ. Not surprisingly, Carey sometimes got discouraged. On one occasion he wrote back to his family in England: “I feel as a farmer does about his crop: sometimes I think the seed is springing, and thus I hope; a little time blasts all, and my hopes are gone like a cloud. They were only weeds which appeared; or if a little corn sprung up, it quickly dies, being either choked with weeds, or parched up by the sun of persecution. Yet I still hope in God, and will go forth in his strength.” Though he sometimes grew weary in doing good, Carey refused to give up. In 1800 he finally began to reap what he had sown, baptizing his first Hindu convert in the Ganges River. This was the firstfruits of a great harvest among the Indian people.

Or consider another example, this one from the colony of Virginia. It concerns the conversion of a man named Luke Short at the ripe old age of 103. Short was sitting under a hedge when he happened to remember a sermon he had once heard preached by the famous Puritan John Flavel (d. 1691). As he recalled the sermon, he asked God right then and there to forgive his sins through Jesus Christ. Short lived for three more years, and when he died, this inscription was put on his tombstone: “Here lies a babe in grace, aged three years, who died according to nature, aged 106.”

But here is the remarkable part of the story: The sermon Short remembered had been preached by Flavel back in England eighty-five years before! Nearly a century had passed between the sermon and the conversion, between the sowing and the reaping. But a man reaps what he sows, and at the proper time Flavel reaped his harvest.

This is a reminder not to evaluate ministry on the basis of immediate results. Too many churches, especially in America, want to taste the fruits of their labours the day they are planted. Yet most spiritual produce takes time to grow. A long time. Often it takes years before parents, teachers, or ministers are able to see their work pay off. “Be patient, therefore, brothers,” wrote the apostle James, “until the coming of the Lord. See how the farmer waits for the precious fruit of the earth, being patient about it, until it receives the early and the late rains. You also, be patient. Establish your hearts, for the coming of the Lord is at hand”” (James 5:7-8).

And so, if you have grown weary in “doing good. . .to everyone, especially those who are of the household of faith” (Gal. 5:9-10), remember these words from the Apostle Paul “for in due season we will reap, if we do not give up” (Gal. 5:9). In thankfulness for God’s grace to you in Christ, sow faithfully and wait patiently for the harvest.

In the words of Paul Tripp:‎

“Pastor, it’s like us waking up in the morning and saying, “I’m redeemed. I’m redeemed. I’m redeemed. I can’t believe that I am one of God’s children! I can’t believe that God has placed his love on me. I can’t belive he has called me to his work! No, my life and ministry isn’t always easy, but I’m redeemed. No, the relationships with people around me don’t always work the way they should, but I’m redeemed. Yes, I live in a world that is broken and does not operate as intended, but I’m redeemed. Yes, I face personal and ministry disappointment, but I’m redeemed. I can’t believe it, I am one of God’s children and one his spokesmen!. . .So, pastor, are you a celebrant? Has your life taken on a joy and focus that would not be possible any other way? Or in the course of your ministry, has the truly awesome become merely commonplace? Has the search for ministry comfort and satisfaction consumed you more than the celebration of the spiritual realities that should now define you and your work? Has remembrance decayed into forgetfulness? Have you lost your first love? If so, confess your forgetfulness. Seek God’s help for your distraction. Commit yourself to a life and ministry of celebration, knowing that this includes being a soldier in the ongoing war for your own heart. And remember that you are not alone; there is daily grace for every one of those battles. Now, isn’t that worth celebrating?”

I just started reading the book, The Work of the Pastor, by William Still. Here is a great quote:

“If you think that you are called to keep a largely worldly organisation, miscalled a church, going, with infinitesimal doses of innocuous sub-Christian drugs or stimulants, then the only help I can give you is to advise you to give up the hope of the ministry and go and be a street scavenger; a far healthier and more godly job, keeping the streets tidy, than cluttering the church with a lot of worldly claptrap in the delusion that you are doing a job for God. The pastor is called to feed the sheep, even if the sheep do not want to be fed. He is certainly not to become an entertainer of goats. Let goats entertain goats, and let them do it out in goatland. You will certainly not turn goats into sheep by pandering to their goatishness. Do we really believe that the Word of God, by His Spirit, changes, as well as maddens men? If we do, to be evangelists and pastors, feeders of sheep, we must be men of the Word of God” (p. 23).